A promising approach of the therapeutic strategy in melanoma is based on cancer cells potential to trigger an immune response by expressing at the cell surface antigenic peptides derived from proteins such as Melan-A, Gp100, MAGEs, Tyrosinase. This has led to therapies based on cancer vaccines in which an antigenic peptide or a cocktail of antigens are used to boost the immune system of the patient for tumor cell recognition and rejection. This strategy offers the advantages of an increased specificity and a lower toxicity compared with the traditional interventions.  One of the most promising melanoma antigens is tyrosinase, which was frequently found as overexpressed in melanomas. It wash shown that this protein undergoes unproductive folding in the endoplasmic reticulum (ER) leading to the selection of the incorrectly folded molecules for degradation via the ubiquitin proteasome system. In this pathway peptides are generated, which can form stable complexes with HLA molecules in ER and be presented to the tumor cell surface for CD8+ T cell recognition and melanoma cell destruction.  The current project aims to study how the oxidized epitopes of melanoma antigens could trigger an immunological response to the melanoma tumors. This will provide the opportunity to study the tumor immunobiology, whilst obtaining antigens with increased immunogenicity for subsequent use in the immunotherapy of melanoma. 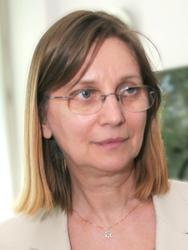 Director of Institute, Head of Department

Dr. Petrescu graduated from the Department of Biochemistry, University of Bucharest and obtained a PhD in Biology from the Romanian Academy. She was a DAAD fellow and FEBS fellowship recipient at University of Wurzbur More...